This Month in a Nutshell

For the majority of this month, everything was looking great. We were powering through to new heights and unlocking new levels with traffic and ad earnings.

In the middle of the month, however, I noticed that Site 2 only had around 150 articles indexed, and 60 or so new articles were not on the sitemap at all! This was actually good news for me, as traffic had been growing despite having a massive chunk of the site unindexed.

I swiftly resubmitted the sitemap and relaxed in the knowledge that once Google indexed those articles, traffic would deliver another boost.

I immediately started doing some investigation and trying to troubleshoot what changes I’d made in the last 24 hours that could have caused such a drastic decline in traffic.

I came up with a few possibilities:

1) I installed AMP on the site a few days prior, as recommended by AdSense (I just had my $60 ad day, $40 of which was from mediation so I felt compelled to listen to their “optimization opportunities”). In short, AMP broke a bunch of things, and I left it.

2) I installed the free Query Hunter plugin. It is a fantastic plugin that lets you find related keywords your post is already ranking for – but it was on my “what have I added in the last seven days” list, so I questioned it, too.

3) I used Instant Indexing when I realized a ton of my articles weren’t being indexed.

The only one I really suspected, though, was the AMP plugin. It broke a bunch of stuff, and I was getting alerts in Google Search Console about it. I quickly uninstalled the plugin and waited to see if traffic recovered. It did not. In fact, it continued to decline for the next few days and my Twitter followers confirmed that there was a Google-bug, of sorts, going around and destroying things.

I have spent less on new articles this month as I have been improving existing articles and trying to squeeze more out of the articles already doing well. The site has a total of 225 articles with an average length of 1500 words. 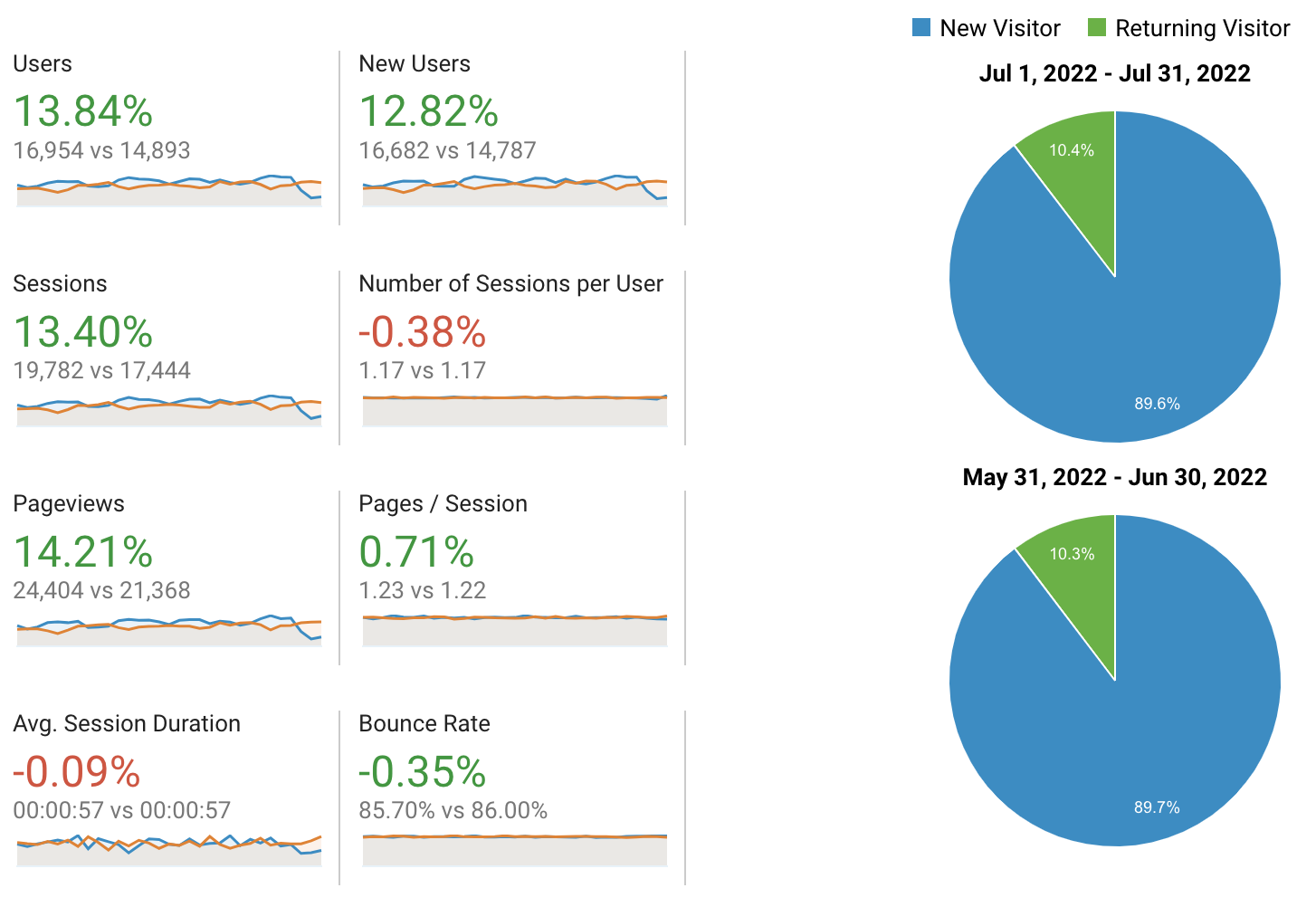 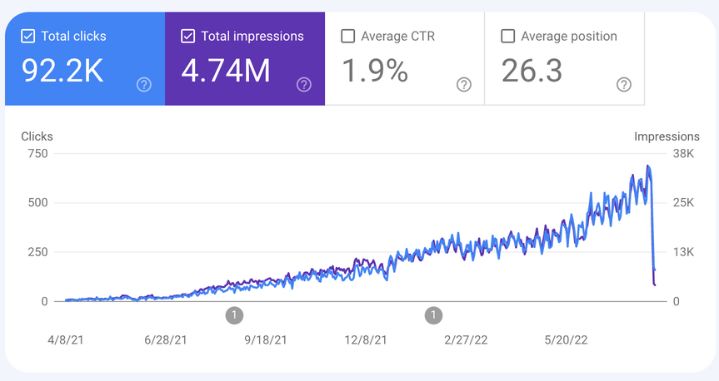 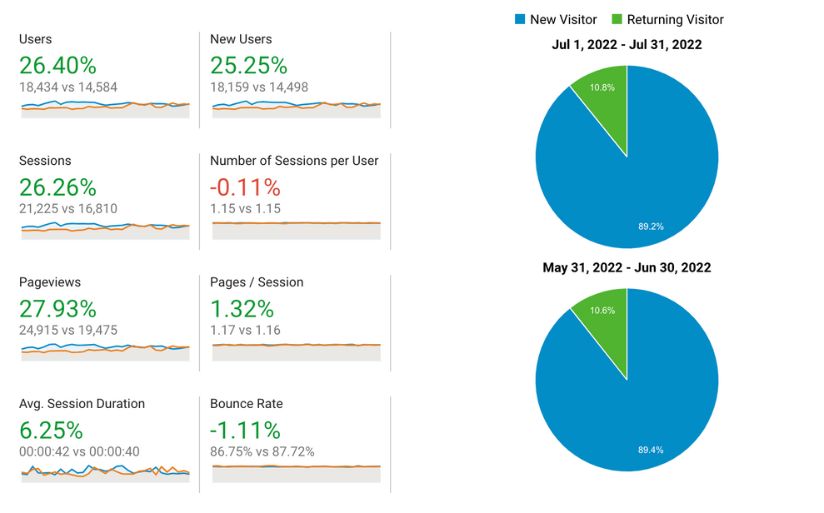 I managed to fix my GA, and it is all working again, showing the correct user stats, bounce rate, and page views.

As mentioned previously, I am sure it is a combination of the Prime Day promotional event, raised commissions for the month of July, and my added reusable blocks. Whatever the reason, Amazon sales were up.

Quite obviously, what is not working for me right now is Google’s algorithm. I do not want to shift too much of anything as there is nothing that stands out to me that Google would want to target. I believe this particular issue is out of my control and that I might break something trying to fix it.

I’m trying to stay flexible with my plans for next month. I originally wanted to focus on building my mailing list and creating evergreen content, but much of that depends on the traffic I get from Site 2. If traffic from that site starts to pick up, it will be more lucrative and urgent to focus on those things.

However, if traffic remains low, I’ll need to reassess my priorities. In any case, I’m hopeful that things will start to look up soon so I can get back on track with my original plan.

I am now faced with the pivot or stick it out scenario again. I want to shift my focus to another site that is thriving, but I also think this drop in traffic will be temporary, and traffic will shoot past previous highs when it all rectifies. This, of course, is purely speculation, and it probably makes more sense to thin the risk out and put my resources elsewhere.

If I have to pivot, I have a good idea of which site to focus on. Since Site 7 is primarily product-centered and has a low EPMV, it might not be the best site to focus on, although there are many reasons it could be a good choice.

One reason is that there is a white label/eCommerce aspect to this site that could be explored if I wanted to take that route. I am currently getting a small percentage of sales with a decent conversion rate of around 15%, while the site has sent over $33,000 in sales over to Amazon. Of course, this would be a huge move with its own learning curves and risks; but it is an option.

About the Author: Arielle Phoenix is an author, blogger, and business enthusiast documenting her SEO/niche site journey on her blog and hoping to help and inspire as many people as she can along the way. 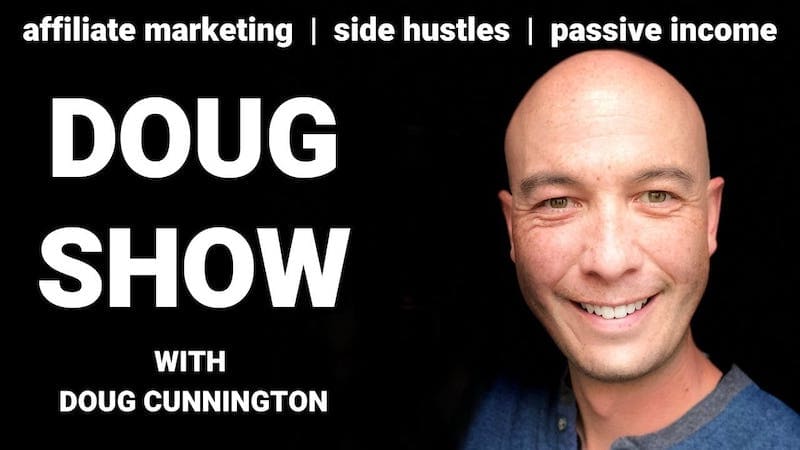