All our life, so far as it has definite form, is but a mass of habits – practical, emotional, and intellectual – systematically organized for our weal or woe, and bearing us irresistibly toward our destiny, whatever the latter may be.

This book is fantastic.

I have been telling anyone that will listen to me about it. I can bring it up in almost any conversation.

The Power of Habit explains Why we do what we do and how to change.
Here is an Amazon link if you want to check it out. (affiliate link)

The review is what I found most interesting or important. These are my glorified notes.

Since these are my notes, you should check out the book for yourself. Perhaps you’ll find something else more useful.

I believe the appendix is the most actionable and useful part of the book. It applies the knowledge, research, and framework of the rest of the book.

The appendix is named, A Reader’s Guide To Using These Ideas – so, that’s appropriate.

Applying the ideas comes down to using a framework and having a plan.

Let’s review how habits work. All habits follow this loop: 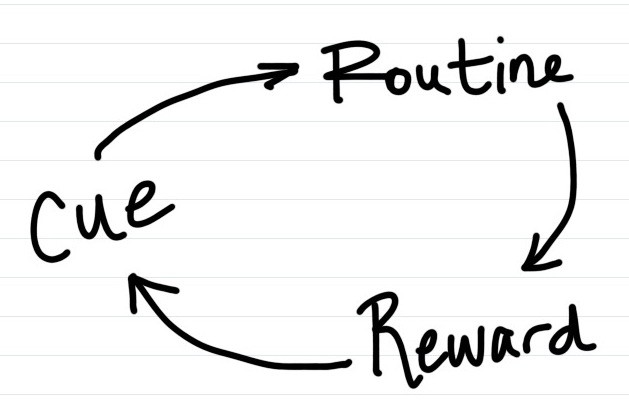 The habit becomes automatic from start to finish, and your brain can reduce its level of participation. That is why you can walk and talk at the same time – you don’t need to concentrate on walking as much as, say, a toddler.

Let’s get back to applying this stuff.

The idea is to determine what craving you are trying to satisfy when you get the cue. You can try to adjust the reward to give you an insight about what you are craving. 15 minutes after the experiment write down the first couple thoughts that come to mind. It doesn’t need to be a journal entry – 5 words or less should suffice.

The thoughts will give you insight about what you are craving. You may write something like this:

The example in the book is about how the author got a cookie in the afternoons and wanted to change the habit. He tried to eat a healthier snack instead, but that didn’t seem to satisfy the craving. He noted that he walked to the cafe to buy the cookie, so he tried to walk for a few minutes instead. He realized that didn’t do the trick. He eventually figured out that he craved the conversations with his colleagues in the afternoons. Instead of buying a cookie, he can go to a friends desk and have a chat for 15 minutes then finish the day without cookies.

There are five main categories of cues:

When you figure out the habit loop for yourself, then you can take action to change the behavior. You can plan for and anticipate the cue while choosing a behavior to deliver the craving you need. The author determined that he craved company and conversation rather than the cookie.

You need to architect your own habit loop. It is really hard to rely on self-discipline and will power to form new habits. You can develop

You can develop cues for yourself.

Let’s say you want to do pushups every day. You can design the routine like this:

Creating a new habit can take the same kind of experimentation as changing a habit.

Be patient and take the time to note the cravings. That way you can adjust the cue or reward as needed.

Other Cool Case Studies in the Book

The book is filled with interesting facts, case studies, and examples. Here are a few that I found particulary interesting.

These are habits that have far reaching impacts. They have the power to transform everything.

The example in the book is when Paul O’Neill took over as CEO for Alcoa. The author, Charles Duhigg said it well for NPR:

“When he first got hired, everyone expected him to come in and say, ‘I’m going to concentrate on profits and efficiency and making people work harder.’ But instead what he said was, ‘My No. 1 priority is transforming worker safety habits within this company, so that we have zero injuries’ — which is a big deal in a company where all of your employees handle molten metals,” Duhigg says.

By focusing on worker safety and examining how an inefficient manufacturing process is dangerous to employees and produces subpar aluminum, O’Neill found a way to bring the entire corporation in line.

He catalyzed a series of better practices and habits throughout Alcoa, making it one of the world’s most profitable and efficient companies.

The result was that most of the root causes were fixed by improving the equipment or the processes. The other result was that the communication channel improved in a dramatic way – from the factory workers to the CEO.

The habit of success – when willpower becomes automatic

This is one of the main reasons that I started waking up earlier. Willpower is like a muscle and it gets fatigued.

Willpower isn’t just a skill. It’s a muscle, like the muscles in your arms or legs, and it gets tired as it works harder, so there’s less power left over for other things.

The example: There was a 4 month experiment to improve willpower. 29 people were enrolled in a money management program where the participants were asked to reduce luxuries and keep a log of all their purchases.

The participants improved their finances over time. There was a side effect.

As people strengthened their willpower muscles in one part of their lives—in the gym, or a money management program—that strength spilled over into what they ate or how hard they worked. Once willpower became stronger, it touched everything.

I can’t say it better than Duhigg did. It goes to show that you can focus on one habit (or one area in your life) to work on at a time. If you try to change too much at once, it can become overwhelming.

Improving the one habit can automatically improve other areas without any additional effort.

If you’re interested in habits at all, you should definitely read this book!

Habits are powerful, but delicate. They can emerge outside our consciousness, or can be deliberately designed. They often occur without our permission, but can be reshaped by fiddling with their parts. They shape our lives far more than we realize—they are so strong, in fact, that they cause our brains to cling to them at the exclusion of all else, including common sense.

If you read the book, what did you think of it?

About the Author: Doug Cunnington is the founder of Niche Site Project. He shows people how to create Affiliate Sites using project management and a proven, repeatable framework. Doug loves creating systems, using templates, and brewing beer (but usually not at the same time).