The punchline is that I made over $10,000 in about 6 months from my first Amazon Associate Site.

And I’ve been working online, full-time for three years. I got laid off in 2015 from my project management job and haven’t looked back.

It hasn’t been easy or fast, but it’s awesome to realize you can work on your own terms. If anyone tells you it’s easy, they’re selling you something — B.S.

I think the Amazon Associate program is the best way to get started online.

I can give a quick update on some of my recent earnings because you’re here to learn about how much you can make with this affiliate program.

Get all my Templates & Systems Here.

To illustrate how fast your revenue can grow, that same site was making just $100 per month in January of 2016:

Most of the growth can be attributed to the Keyword Golden Ratio, a data driven way to find great keywords.

What about Project Go White Hat?

I talk all about the details in the blog series called Project Go White Hat. Check the whole series here.

And for your reference, we not only sold the site but while we were working on it, the site was making well over five figures per month.

By the way, the huge earnings increase from $10,000 in September 2016 to December 2016 was due to adding a lot of KGR content and improving existing content.
Get all the content templates I used here.

A lot of things have changed since 2014 so be sure to look at the updated Niche Site Process Framework and Roadmap after you read the post below. Here’s what’s covered:

Yep, I’m pleased with the outcome on this project.

This has been an unbelievable ride so far.  The initial goal that I set was to create a website that made $300 per month on a consistent basis within 4 – 6 months.

Get all my Templates & Systems Here.

The site beat that mark after just two and a half months.  After that period, the earnings have been unpredictable in a very good way. (Looking for more inspiration: Here are examples of Amazon Affiliate Sites with traffic data…)

I made over $10,000 in 2013 from a single Amazon Affiliate web site. I purchased the domain name on July 14, 2013 and immediately started writing. (Read about how to build an Amazon Affiliate Website here.)

The first 6 weeks were very slow but things took off after that, with a peak of over $6,000 in December.

The table below shows the earnings by month from August through December.  (This is not a cumulative total – that table will be shown later.)

As I mentioned, the site was started back in July so it did take some time to get started.

There were several weeks of writing content.  I spent even more time building links.

You can see that the first month with any earnings was August and those sales occurred at the very end of the month.   It was only $20 but it was just like everyone says – the first earnings are very important.  It shows that the concept works and the meager earnings at least show that you should keep persevering.

September was a great month since it signified that I reached my goal of $300 per month earlier than expected.

In addition, the earnings were much higher than I thought they would be.  I think I was trying to lower my expectations at the beginning of the project to keep from being disappointed.

However, it is a bit difficult to estimate how profitable a niche site will be since each niche is different.

Critical Information About the Niche and Keywords

I picked a great keyword.  Actually, it was my extremely supportive wife that first thought of the keyword.  After some keyword research, I thought the niche was worth a try.

Google trends reveals that my primary keyword has a steady search volume through most of the year – steady until October.  In October people start searching for the primary keyword more often, and the growth continues until December.  The increase is about 20 – 30%.  That is significant.

At the time of the keyword research, I used the Google keyword planner for my keyword research. It does the job, even though it is slow for intensive keyword research.  For the Long Tail Pro users,, I think the Keyword Competitiveness (the “KC”) number was about 32 – 34 back in July for the primary keyword.  The KC is higher the last time I checked about 34 – 36.  (. I highly recommend it since it’s the standard tool for keyword research. Click here for a free trial via this affiliate link.)

The earnings per item give us some insight into the average cost of the items.  The niche I am in provides a wide range of price points.

Hitting the higher % tiers require that you sell more items.

There are $10 items to $310 items that do the same job.  The one thing to note is that each of the months has a different commission tier.

Google Rankings and a Few Notes on Link Building

The website started getting a little bit of long tail traffic in August.  That improved in September significantly and by the last week of September, the site appeared at the bottom of the first page.

By early October the website was ranked in the top 3 for the primary keyword and number 1 for a couple of the long tail secondary keywords.

The website was at number 1 for the primary keyword by mid-October.

The ranking seems to be stable at this point.

The link building was a critical step.  It was time-consuming.  I followed the standard plan you see in several other blogs (like Niche Pursuits) with tiered linking structures.

In general, you could categorize the links as social profiles, web 2.0 free blogs, and article directories.  I also purchased a few fiverr gigs to point to the first tier of links, not the niche site (the money site).

Yes.  If you’re wondering if this is passive income, the answer is “yes.”

I haven’t added a new article since mid October.  I have three written and ready to post but I thought it would be an interesting experiment to stop adding content.  I do get about 1-2 comments per week from visitors that ask questions about products.  That takes about 15 minutes per week.  I have added a few links since October but only about one link every two weeks.

I will probably go ahead and publish the three other posts that are drafted in the next few weeks.  In addition, I have vendors contacting me to review their products.  I expect they will be happy to link to the site once I post a review.

These stats speak for themselves pretty well.  There is growth, fast growth, coming from nothing back in July, 2013.

What questions do you have for me? I want to provide a thorough but not boring overview of my niche website. I know I left out some details so feel free to ask about them in the comments below. 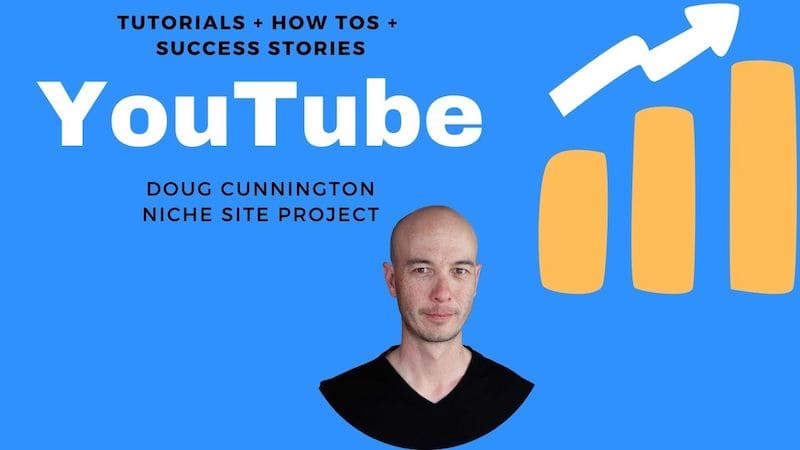 About the author: Doug Cunnington is the founder of Niche Site Project. He shows people how to create Affiliate Sites using project management and a proven, repeatable framework. Doug loves creating systems, using templates, and brewing beer (but usually not at the same time).

This site uses Akismet to reduce spam. Learn how your comment data is processed.